Taking part in a Guardian livechat 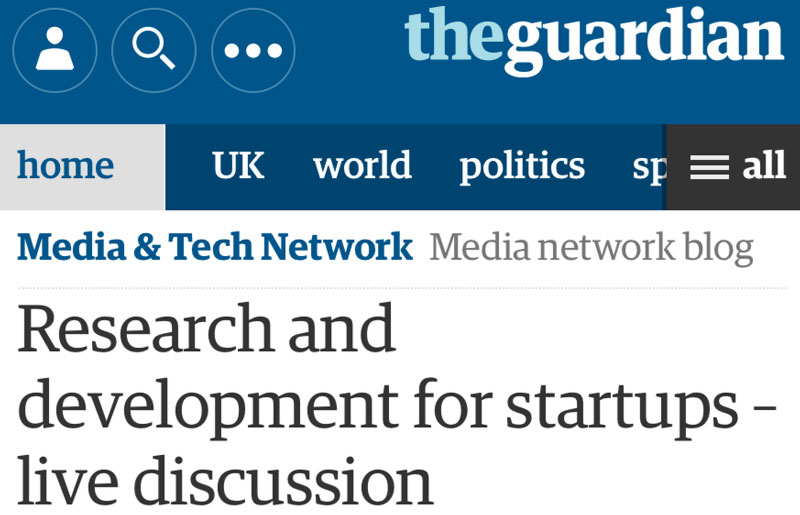 Taking part in a Guardian livechat

On Wednesday 9th July, I was invited to join in a panel of distinguished international entrepreneurs for a livechat on the Guardian’s Media Network. We were discussing the role of research and development for startups, especially in the tech industry. I was the only academic researcher on the panel, but the other participants came from some fantastic companies:

For example, Ajay’s background included running Shazam, and he noted that “the first money making opportunity was not consumers recognising music but royalty collection companies using it to monitor radio play – not something we expected at all”. That sense of embracing the unexpected really permeates the world of tech startups, and applies equally well to Hippotrix’ work.

The discussion was facilitated by Matt Caines, Editor of the Guardian‘s Culture Professionals Network. We started off by looking at what R&D means in the context of a startup / young company, and I was able to talk about the mutual benefits of research for industry and academia.

We swiftly moved on to a wide range of topics, from wearable technologies to the role of digital media in the arts. A key concept which emerged for me was the idea of the Minimum Viable Product – the simplest version of a product which can still fulfil the user’s expectations. For some participants, this was a part of their design process, finding the MVP for each stage; for others, it was a means of getting a product out quickly and cheaply, with consumers understanding that updates will be released as time goes on. Hippotrix regularly update their apps, sometimes in response to Apple’s software updates but also seasonally (such as for Hippo Seasons) or when a new element is completed (such as the confetti explosion recently added to the finale of White: The App).

From there, we touched on funding, Agile environments (creating software by using iterative / incremental development, or “quick sprints”), the necessity of failure, Product Management, collaboration, commercial sensitivity and much more. Aside from a few gremlins in the commenting software at the Guardian, the livechat was great – fascinating viewpoints from some great contributors, lots of discussion and exchanging ideas and tips, and a chance to think big and look to the future.

You can find the whole discussion archived at: https://www.theguardian.com/media-network/media-network-blog/2014/jul/07/innovation-r-and-d-startups-live-discussion